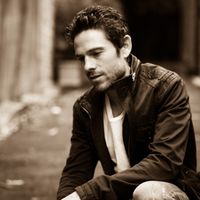 Acoustic pop, Americana, neo-folk, singer-songwriter – these are all labels that could aptly apply to Mark Wilkinson, but ultimately he lends his voice to the human condition. Those moments in life that bear memory, those questions that drive us all. So universal they aren’t bound by time or place, but so few can ever put into words.

“He truly has a gift for poetic lyrics...There's a glow of warm around him and a richness to his supreme voice, sending shivers down spines as he pulls you into the soul of him.”
— Hazel Buckley, TheMusic.com.au

It’s this simple but all too rare ability to connect that’s brought him acclaim the world over. His music has risen the charts on two continents, his shows have sold out in half a dozen countries more. He’s shared arena stages with some of music’s most enigmatic names like Brian Wilson and Rodriguez, but he can still be found performing on the street, forging connections through song without barrier or contrivance.

Now on the eve of releasing his third studio album, Mark Wilkinson presents the Lost In A Dream EP. This 5-song extended player previews the upcoming release with lead-off track ‘We Were Rich’ lifted from the album. Entirely self-produced, this intimate collection of songs showcases Mark Wilkinson’s timeless sound, rich vocals, and poetic gift, keeping the essence of the songs in full focus.

To celebrate the release of Lost In A Dream Mark Wilkinson returns in 2017 for his biggest but most intimate tour yet. In honour of the connection with his fans, Mark has given them the opportunity to host a show, be it in their garden, living room, or village hall, to present the songs in their most stripped back form and share in a night of music that breaks down the barrier between artist and audience. To share in those experiences that bind us all. Performing countless shows around the globe, this year he has come to call The Road Home.

Please Note
• This show is at a secret location. The map above is just a general guide and additional information including the address will be provided via email.
• There are no physical tickets for this show, you will receive booking confirmation via email upon purchase.
• This show is open to people of all ages.
• The show is BYO, please feel free to bring your own drinks and some food to share.
• Ticket price includes all booking and transaction fees. Click on the button below to purchase.